The tall and skinny bot is feeling awkward and out of place. 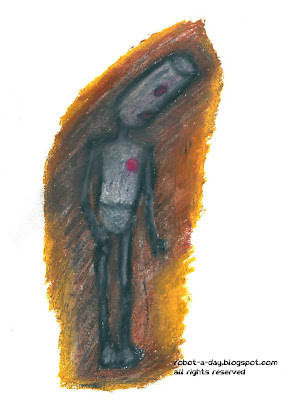 Not trying to bite The Daily Robot's style, but instead this is inspired by his awesome consolidation of parts into robots (like This one and remixes like this and not to mention the awesome RayGun Schematic print (of which I bought a copy). 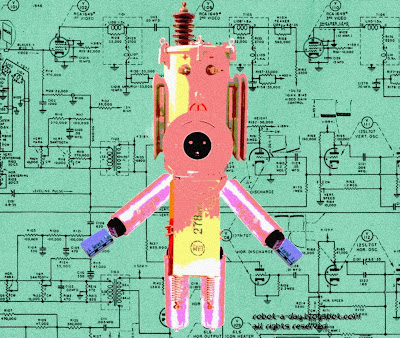 Not seen in warmer climates, the Snowy Owlbot is a majestic robot with a talent for hunting down smaller obsolete technology. Here one is feasting on a favorite meal - a CueCat of the PS2 variety, that's good eating! 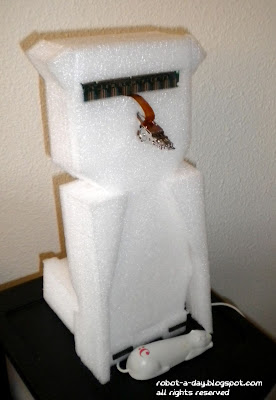 Another fanbot, it's pretty humid/warm today for late September in Oregon so time to break out the robot eyes and mouth and slap them on something! 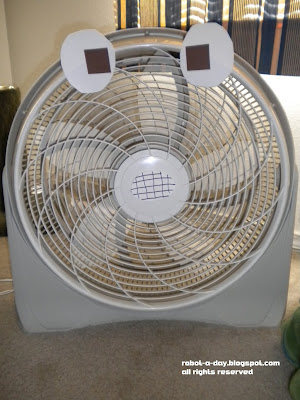 From the WPA archives, one of the first attempts at a farming automaton, unfortunately it was a bit too rustic and the parts were later used on a dam somewhere in the Tennessee valley. 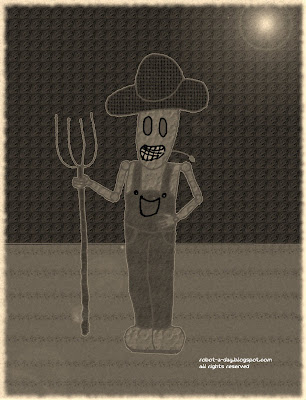 Are two heads better than one? Does one have good thoughts while the other plots destruction? Well, no - they both want a meatbag pinata to play with. Science must go on, sometimes at the expense of the scientists. 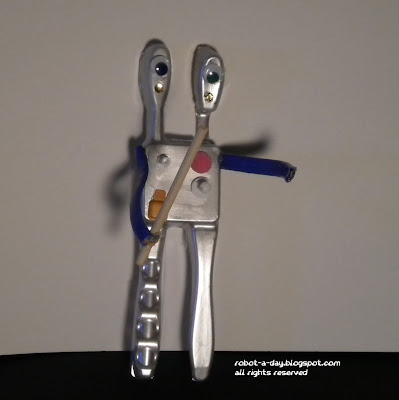 This robot lost it's head.

Found by Paloma as she walked in to work, poor little keybot is all by itself now. 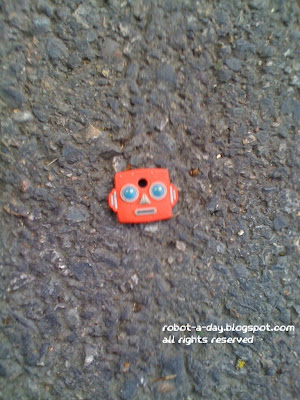 So what mood is your robot in today? This handy chart can help you figure that out! 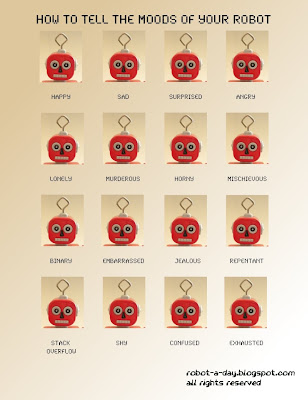 Based on those 'Today I Feel' posters and such, had a magnetic one given to me by my wife from her university's new student week, tried to modify it but just wasn't working out. So went to my stand-by of Neutron Robot Man and GIMP. Special thanks to Paloma (my wife) for 'BINARY', perfect mood for a robot!
Posted by Chris Z. at 9/23/2010 04:56:00 PM 1 comment: 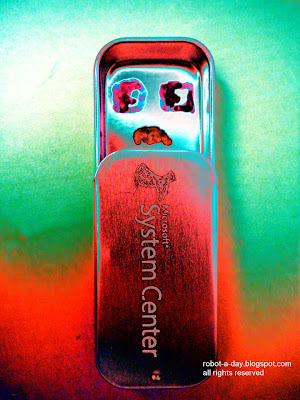 Someday the little ROMerpillar will grow up to be a beautiful Cyberfly. 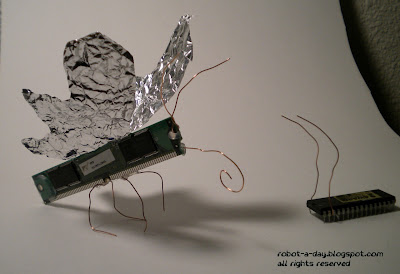 #108 Rounding out the iPod family

Might as well load this one up now so I'm not tempted later. My 2nd gen shuffle. 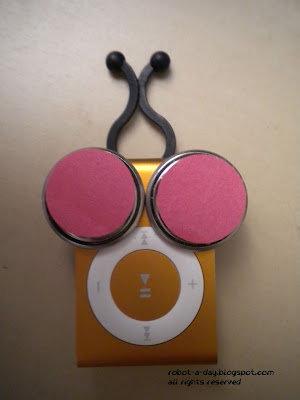 Second iPod robot. This one is my obsolete first generation shuffle that is dead except for use as a quick robot. 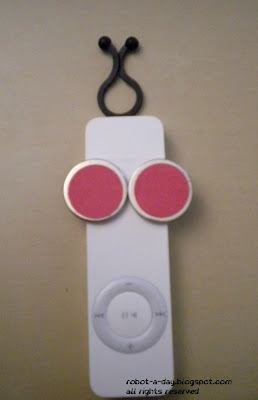 An attempt at a hybrid robot of organic material and metal. Oak and steel. It never could get over the horror that it was not quite alive. 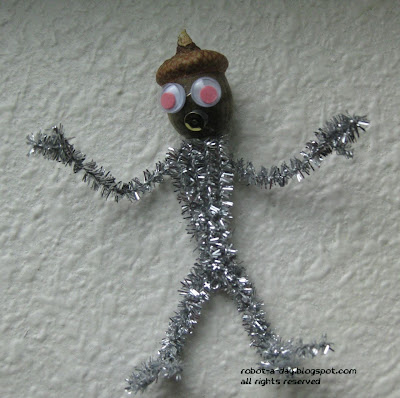 Guest post today courtesy of my dear wife Paloma. This is the card she made for me for our anniversary, a cute robot couple. Thanks sweetie! 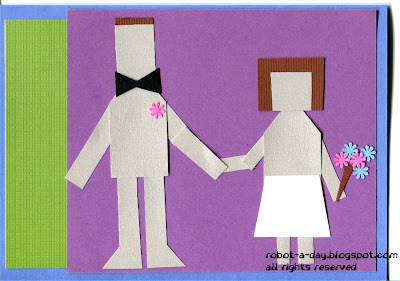 It computers therefore it is? Descartes contemplation perhaps? 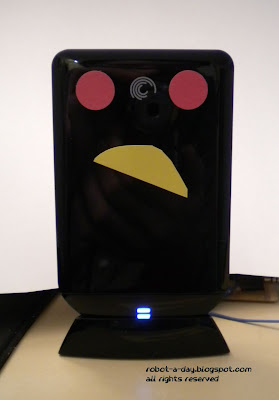 
Anniversary Bot, hand cut card for our 15th anniversary which is tomorrow. 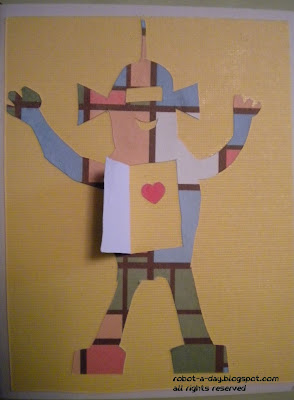 It's a gift bot full of love (or WUV!). Gift for my dear wife on the celebration of our 15th wedding anniversary this week (in the box, not the box itself!). 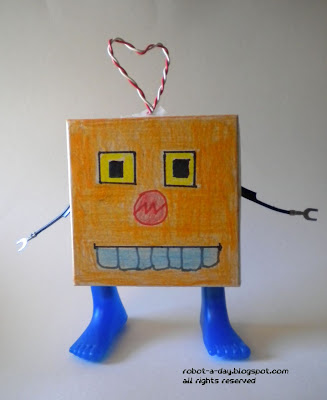 Using the image I made yesterday's papercut from I did a Warhol-ish design. I know, it's pretty played out but I did recently see the original Warhol of Marylin Monroe during my stay in DC earlier this year and thought it was really cool. If I could do Lichtenstein I'd do one like that but my drawing isn't that good. 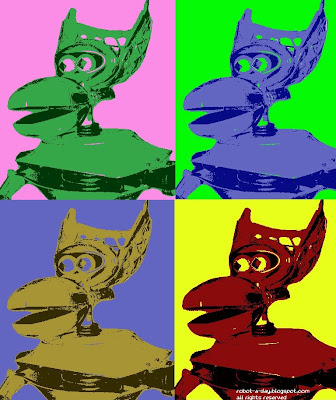 For bot #100 I wanted to do something a little more intensive so with a big thank you to the Dudecraft Blog and Paul Overton I did a papercut Crow T. Robot. Paul is a master of the papercut, I've done one other prior to this, a papercut of my dad's Marine portrait as a gift to my mom after my dad passed away last year.
This is about 4" x 5.5" and the black layer was toughest with it's little fussy bits. Check out Dudecraft and look at the various papercuts or look at the Dudecraft Flickr pool for some other amazing papercuts. 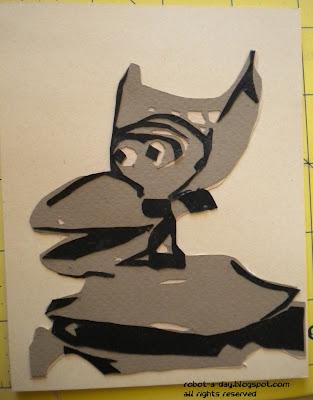 99 Bots down! So here is a GIMP created label for an IPA (since the Pacific Northwest is known for the fine hops that are produced here). Still struggling to get the hang of GIMP, which pushes me closer to getting Photoshop again since I understood it much better. 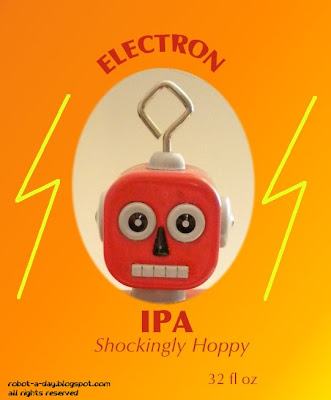 Stamping around is today's robot. Hand made stamp cut from a Magic Rub eraser. 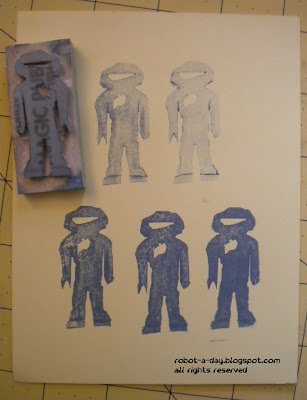 Portly bot made with some parts from earlier bots and a wax covering from some Babybel cheese. 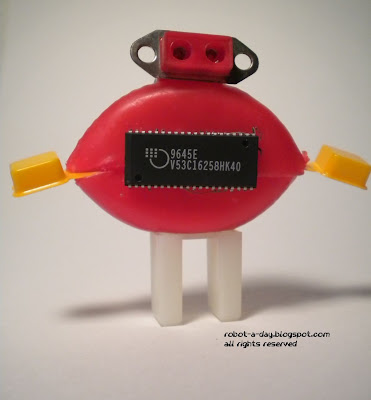 For those that don't watch Robot Chicken - The Humping Robot gets its rocks off on humping mechanical and other inanimate things. Here is a Fisher-Price Little People style interpretation of him. Charging up on a 9 volt. 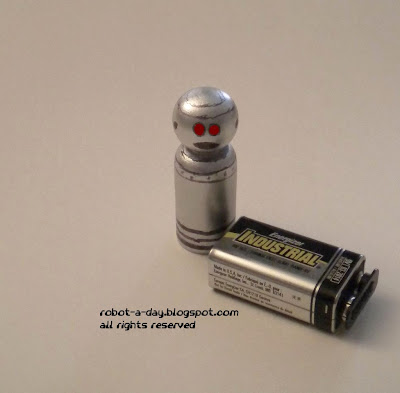 Arranged with 15 issues of Everyday with Rachael Ray magazine and a couple inserts. Yes, I like Rachael Ray, I make no apologies. 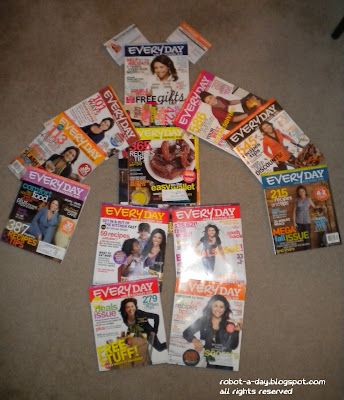 Not sure how our cat has any fur left, this gathering is from washing one of her blankets, a lint-trap full. 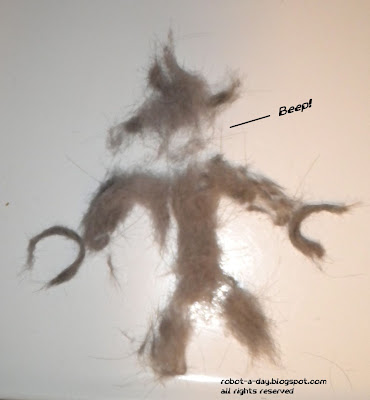 A word of warning to certain automatons, if another group of automatons says they don't serve your kind it might heed you to steer clear of their data channels. This one just wouldn't take no for an answer and is now a warning pike on the entrance to those particularly less than hospitable robot's territory. 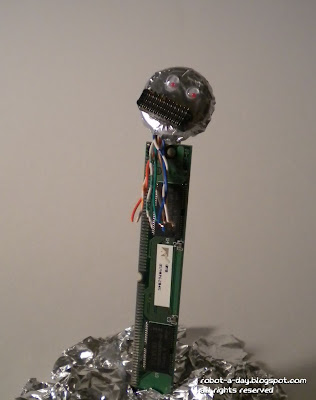 Few know that Rosie the Robot (as seen on The Jetsons) started out as an exotic French Maid bot working in a robot dance club. Until that unfortunate day the creepy little man with the mustache and a strong 'sprocket' fetish came in. He demanded a lap dance, his lackey George said it was crazy. But hey, money talks and common sense walks.

The dance happened, the little creep was almost crushed, Rosie fell and was grievously damaged and George was left to cover not only the little man's dalliances but to pay off the club owner. In order to 'pay' George back the little man bumped his pay and had Rosie remade into a robot maid and gave it to George, his family none the wiser behind what really happened.

That bald freak who loves cogs knows that dirt can be dug up and he might be able to force his competitor out of business. He tries and tries but George knows if he values his insides on the inside he will keep quiet as his boss made sure should he ever speak out about it he'll find Rosie a capable disembowler as well as being able to clean it all up afterward. 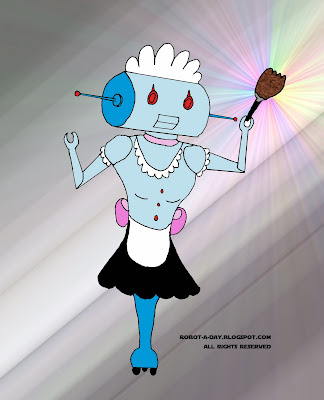 Had a divot removed from my leg today (hopefully benign growth) and the lights looked very robotic, so pic of lights, pic of my leg, crappy GIMP shopping job and VOILA! MAGIC! 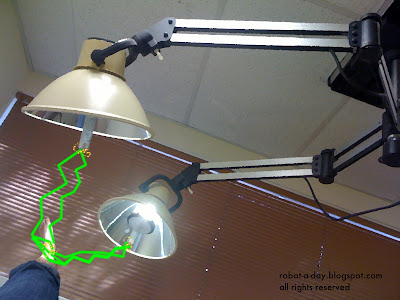 Apple technology lives in mortal fear of Steve Jobs keynote addresses. They just know that one of these days 'Oh, and one more thing...' will mean they've been usurped by a newer, cuter model. Fortunately for my iPod classic it's safe for now but it still looks around the corner. 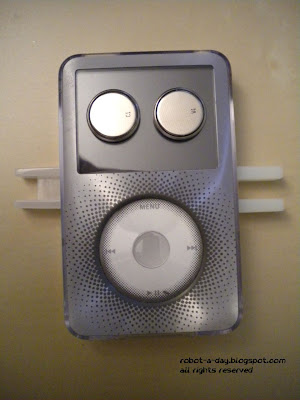 Johnny Sokko would like this Giant Robot. Inspired by the great Japanese TV show and a bit of Gundam influence as well. 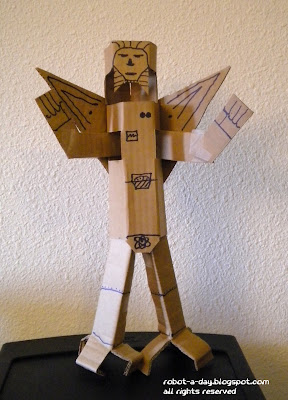 My name is Chris Zeliff, inspired by Noah Scalin's Skull-A-Day site I made a robot a day for a year! It was a blast to challenge my creativity and to play with some different mediums. I will still be making robots, just not every day.

I can be contacted at flamingatheist - at - gmail dot com

Great sites and other 365 projects